Dark Matter: Art & Politics in the Age of Enterprise Culture 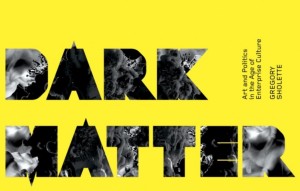 Astrophysicists describe dark matter as invisible mass so far only perceived indirectly by observing the motions of visible astronomical objects such as stars and galaxies. Despite its invisibility and unknown constitution, most of the universe, perhaps as much as ninety six percent of it, consists of dark matter - a phenomenon sometimes called the"missing mass problem." Like its astronomical cousin, creative dark matter also makes up the bulk of the artistic activity produced in our post-industrial society. However, this type of dark matter is invisible primarily to those who lay claim to the management and interpretation of culture - the critics, art historians, collectors, dealers, museums, curators and arts administrators. It includes makeshift, amateur, informal, unofficial, autonomous, activist, non-institutional, self-organized practices - all work made and circulated in the shadows of the formal art world. Yet, just as the astrophysical universe is dependent on its dark matter, so too is the art world dependent on its dark energy.

Contemplate the destabilizing impact on high art if hobbyists and amateurs were to stop purchasing art supplies. Consider also the structural”darkness”within which most professionally trained artists actually exist. Yet, given the proportionally few individuals who achieve visibility within the formalized institutions of the art world, there are really no significant structural differences between an earnest amateur and a professional artist who is made invisible by her”failure”within the art market. Except that perhaps against all real odds she still hopes to be discovered. Nonetheless, these shadow-practitioners are necessary for the institutional, elite art world. For one thing they are the educators of the next generation of artists. They also work as arts administrators and art fabricators: two increasingly valuable resources given the complexity of producing and managing contemporary, global art. By purchasing journals and books, visiting museums and belonging to professional organizations these”invisibles”are an essential component of the elite art world whose pyramidal structure looms over them with its upper levels eternally out of reach.Finally, without an army of allegedly lesser talents to serve as a contrast, the few highly successful artists would be impossible to privilege. A class conscious and materialist analysis begins by turning this equation on its head and asks: what would become of the economic and ideological foundations of the elite art world if this larger mass of excluded practices were to be given equal consideration as art? Nor should this question be dismissed as the domain of sociologists and anthropologists. Radical scholars and artists must take that inversion as a starting point and move to the next stage of analysis: the linking of dark matter to those artists who self-consciously work outside or against the parameters of the mainstream art world for reasons of political and socially critique.

Reading Group Meetings will take place weekly each Thursday for 8 weeks from 28-05-2106 till 21-07-2016 across diverse locations in West Cork and online.

We will use google hangouts - if you don't have a Gmail email  address please create one.